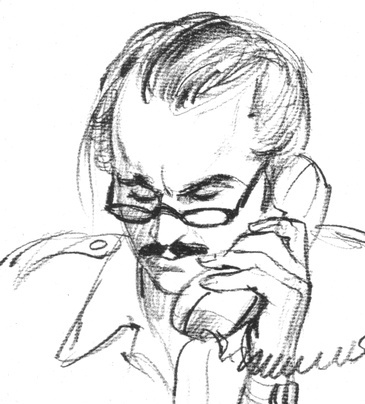 The Harv Toback Fund for the Arts

Harvard Toback was a creative director and art director during the Golden Age of Advertising, as well as an artist and gallery curator who lived in New York City from 1929 until his passing in 2017. In his final years, Harv was finally able to fulfill his lifelong dream of running an art gallery, not once but twice. The first was an intimate, 500 square foot space in the Chelsea neighborhood of NYC.  He had an open-door policy for any artist to come in and present their work to him. Many of the artists featured at the shows would end up hanging their art for the first time at his gallery.

After the gallery closed, Harv became ill with kidney disease and he began dialysis treatment. During his time as a patient, he created an art gallery at his dialysis center, using the otherwise empty wall space throughout the facility. This new gallery provided an opportunity for patients and staff at the dialysis center to showcase their art.

Harv had a passion, not just for creating art, but for encouraging others to express themselves through art. The gallery at Fresenius Kidney Care grew to exhibit the work of the patients, doctors, nurses and medical staff on five walls of the dialysis center. Harv's son, Adam, produced a short documentary about his father and the creation of this gallery. Fortunately, Harv was able to see a first cut of the film the day before he passed away. We believe that being able to see the film gave Harv some peace at the end, and helped him feel ready to move on. Even towards the end and experiencing some physical pain, it brought a smile to Harv's face knowing that his legacy will live on through The Harv Toback Fund for the Arts.